The links just keep coming in. Here are a few highlights from the past few weeks. All found through twitter feed. Great resource for the social media strategist.

A colleague shared a story recently from Nature June 25, 2009 called "breaking the convention?". It discussed how blogs and twitter are opening up scientific meetings to those not actually there.

It's a great story. I've experienced this at several conferences already this year. I was able to follow based on the twitter stream in real time and then had a transcript of audience comments well afterward. You can do it too. Almost every technical conference today has a hash tag (e.g #e2conf) and every session has a hashtag with session number (#e2conf1). After the conference is over (or during the sessions) go to twitter, search on that hashtag and wallahh!, you have the insight. It's great to view the twitter log along with the slides to get the full picture.

Some go on to package up the tweets using a tool like printyourtweets.com and end up with a nice PDF suitable for archiving and sharing.

Glad to see this coming to the scientific community too.
Jim.
Posted by Jim Worth at 10:20 AM No comments:

How I met Andrew Spong

I had a great talk with a colleague today, Andrew Spong of the UK. He and I never actually met before, but in 30 minutes had a great conversation and found many things in common. Here's how it happened.

Back in February, I decided to open a twitter account. After hearing a interesting talk at The Innovators Club in Philadelphia, I began to follow tweets from several of the attendees. It started with 5 or 10 people, I started to comment and before I knew it, I was getting a steady stream of edited and filtered technical news, links, techniques, and general strategic insight on the direction of Social Media and Social Networking.

Fast forward a few months and I started following more and more people in my specific field, application of social media in Pharma. I found @Pharmaguy, then based on his retweets, found @Jonmrich. Jon announced he was presenting at an upcoming Pharma social media conference in NYC on July 23.

I had a conflict and couldn't attend, but ended up intriged by the tweets coming from the event, all using the hashtag #bdi during that morning. I couldn't put down my iPhone to pay attention to what I was really supposed to be listening to, so I multitasked and followed the event on the 2.5 inch screen. When I got back to the office, I continued to follow the event on my PC, noticed it was being streamed live on blog talk radio, and now I was really engaged.

When the event was over, I went to printyourtweets.com, (found that from a friend who did the same at the #e2conf in boston) selected a search on #bdi and packaged up all the tweets from the conference. Adding to that, I was able to download mp3s of the entire event from blog talk radio and I re-lived the event the next morning and afternoon on my commute.

Well, what does this have to do with Andrew Spong you say....hold on...it's coming.

After I had all the tweets in one place, I thought maybe I should reach out to some of the more frequent tweeters who attended the event. I took the tweet transcipt and did some simple excel text manipulation and found about 20 unique twitter accounts representing the majority of the commentary during the conference. I figured these must be interesting people and began following a number of them. Well some were not so interesting, but some were very engaging. Andrew Spong was one of them in the engaging group (31 tweets during the event). We began following each other, and then commenting on each others tweets.

I decided it would be a good idea to make contact, did a DM (direct message), exchanged email addresses and arranged the call that finally occurred today.

That's how it happens in the world of online social networking. Thanks twitter!

I told Andrew the story when we finally spoke today and he said "hey that would make a great blog post"...you be the judge.
Posted by Jim Worth at 5:11 PM 1 comment: 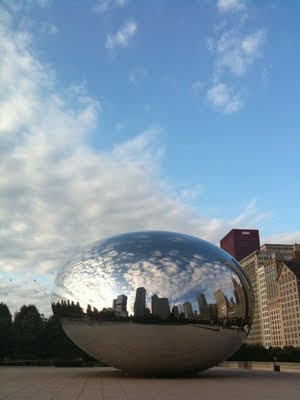 Early Morning run in Millenium Park, Chicago in late July.
Taken with iPhone 3Gs.
I went on to have a great day learning how Accenture has implemented a powerful social media strategy for it's 150,000+ employees.
All in all...a good day (except for the thunderstorms in Newark which extended the trip an extra day, but we won't talk about that)
Posted by Jim Worth at 5:19 PM No comments: