iPad 2: You Only Have One Chance to Make A First Impression 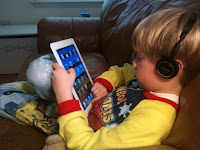 My 7 year old son is sitting next to me. He just woke up and came downstairs to grab my iPad 2 from my hands. His first words..."Oh cool, you got iMovie"

That's OK, he can play with it for now. I have been up for 2 hours and can take a break to write up my first impressions. I'm typing on my laptop because writing a blog post on the touch screen keyboard is just too slow for this seasoned touch typest. But that's OK. The iPad is not designed to replace a laptop. It's another animal all together. As Steve Jobs said it is part of the Post PC class of devices.

I unboxed my new 32GB White wifi unit last night at 6pm. Here's how it went.
Well, that's what comes to mind right away.  I'm an experienced iPad user who is eager to stay on top of the technology as it evolves.  It's a good experience that just got a little bit better.  In time, I'm sure I'll have plenty more to say, but this is one happy Early Adopter.