Lessons From the Crowd

It was an amazing event. About 125 Social Media experts, novices, and curiosity seekers came out this past Monday for BarCamp Doylestown, an "Un Conference" on Emerging Social Business. It was great. The excitement and energy in the room was something we had only dreamed of. In fact one on-site tweeter summed it up aptly tweeting: "Presentations in the main room of #barcamp18901 are very much like twitter --many voices at once; easy to be drawn in another direction"

Rather than write about the event as many others have, I'd like to write about how the event came together. For those of us organizing it, I think it is safe to say, none (or maybe few) of us has ever been involved in anything quite like it.

But first, here are the lessons we learned: 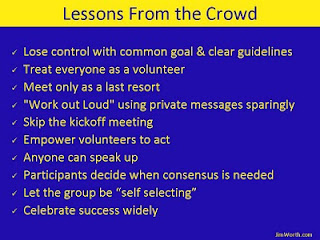 If this piqued your interest, please read on for the context and how these lessons we

Like a fire that starts from a tiny spark, this BarCamp started with a simple tweet
Within just a few hours, all 5 had answered back with comments like: We agreed quickly on a hashtag because the tweets with the names of the organizers started getting unwieldy. We chose #barcamp18901 (for the local zip code) and started to tweet publically about our plans to organize the event. We put the hashtag in each tweet and the initial group and soon other organizers could monitor the conversation.

After a week, we decided to have a face to face planning meeting. We picked a Starbucks for its convenient location and it's free wifi. Still no email or phone calls had taken place. A few had met for lunches to talk about the ideas, but there was no formal organizing. The tweets with the #barcamp18901 hashtag continued.

Expanding on this transparent communication, we decided to set up a public wiki page to organize our thoughts. Using the incredibly powerful and simple wiki from pbworks.com, we created a planning page with a strawman proposal for the event. The page has gone though 84 edits since that initial strawman, but if you follow the link, you will see how we listed the ideas, crossed them off, improved them, documented tasks, asked questions, and generally kept all our notes out in the open for full visibility and transparency.

This transparency proved to be quite valuable. We were all busy people with jobs, families and other responsibilities. We had very little time to get together and even less time to meet up in person. Throughout the day on our iPhones, Droids, and laptops, we monitored the #barcamp18901 hashtag and went to the wiki page to organize our thoughts.

One week after that first tweet, we were meeting at Starbucks at 7am for the first of three face-to-face meetings, a timeslot that soon gained the nickname of "the new noon". It seems we all enjoyed getting together early before the start of our day.

With iPads in hand, we went over the wiki notes, we captured new notes, and then updated with wiki later that day. We all had our assignments, and began to take them on, crossing them off on the wiki as we made progress. A few got started on the venue, others set up the Posterous blog, Facebook page, Youtube channel, Flickr, twitter, and gmail accounts.

I took on the ticketing with a recommendation from a friend to use eventbrite.com. Wow, that was easy. I created an account and started to poke around the site to see how I would set up the event and the free ticketing. As I experimented, I quickly realized, it was all ready to go in just about 10 minutes. I kicked off the event, created an initial "Announcing BarCamp Doylestown" blog post and we were off and running.

For the next few weeks, we continued to tweet, update the wiki, and count the registrations as they trickled in. We promoted the event through the @BCdoylestown twitter account and then through retweets from the organizers. It came together very quickly and by mid August, we decided to meet again and see how it was going. Back to Starbucks at "the new noon" and this time we picked up a few new organizers. Sponsors were beginning to appear and it was coming together. @markmag suggested we update the registration site to ask a few extra questions as the attendees registered. So we started gathering an interesting fact about each attendee, and also asked if they would like to lead a session and if so, on what topic.

More promotion followed, we moved to email lists, linked in connections, and more tweets and retweets. Something snapped by Labor Day and on some days registrations were coming in as many as 5-10 per day. We began to get worried that it would sell out 3 weeks before the event and started wondering if we should raise the attendee limit from 160 to 180. We had picked the magic number of 160 based on the advice of @markmag and @the_spinmd. They said we should register 2x the number of attendees we wanted. The logic was based on their past experience with Barcamps in Philly where usually only 1/2 the number registered showed up when the price was "free". We were wondering, given all the excitement, that maybe we would get better than the anticipated turnout.

We continued to promote, tweet and organize the meeting in the public eye on twitter and the wiki. We shared the password so each of the organizers had the ability to post on our channels. Several people posted on posterous, several on twitter, and one even set up a LinkedIn group.

On Sept 7, just 2 weeks before the event, we had our final planning meeting. It was then that we started organizing the topics and learned that @mannyrechani had secured Newsgator as the food sponsor. We already had a venue sponsor, a soft drink sponsor, and a snack sponsor, but were really looking for someone with deeper pockets to cover the local catering that @nickeyh had worked out. Newsgator came forward and for about the price of a coast-to-coast airline ticket, covered the food and locked up the prime sponsor position for the event.

For the final week, we worked to organize the topics. We used the wiki again to build on the topics. We asked potential presenters to fill out more details on the wiki (not a big response rate), and also asked participants to help us pick the better topics through an online voting tool donated by AppFusions. That proved to work nicely in learning what was of most interest to the attendees, but in reality, the best voting is onsite at the barcamp itself.

@chuckhall printed up large poster pages of the topics and we created a voting process (on the wiki again) that all the organizers agreed to. We broke down and had a few conference calls for final logistics and declared on Friday afternoon that we were ready to go for the Monday event.

How did it go? Check out the site for full coverage.

For all of us, it was a rewarding and educational experience. Specifically I learned:
If you want to see or shape where we go next, just join the conversation by monitoring #barcamp18901 for BarCamp Doylestown.