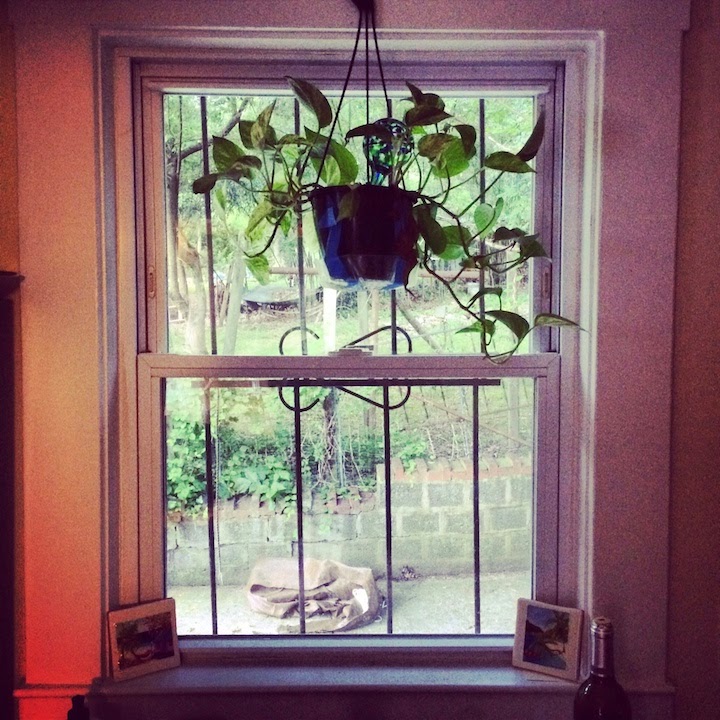 I got the call from my brother. “Don’t expect too much when you see the house.”  You see, three of us were gathering from the corners of the world to attend a University of Maryland graduation ceremony.  Tom flew over from Madrid, Josh drove up from Savannah, and I drove down from Philadelphia for the event in College Park, MD.  We got the idea to rent a house using airbnb.  It was a first for each of us,

As I was driving toward the house, he gave me a call and warned, It’s not quite what I expected. Just think, “You are back in college…. it will help you adjust to the environment,” he said. Both he and I have been traveling for 25+ years on business and have stayed at fine hotels and conference centers all over the world.  We are into our 50s and have grown accustom to comfortable accommodations whether it be our home, a bed and breakfast, or a global hotel chain.

I told him “Don’t worry, I’m up for the adventure.”  And what an adventure it was. I must say we were both taken by the friendliness, the trust, the practicality, and of course, the house cat named Emma.  That’s Airbnb, part of the new Social Economy that includes Couchsurfing.org, Uber.com, and it’s grand daddy, that broke the ice, eBay.

I got to the house early and there was no one there.  Luckily Tom had given me Sarah’s phone number (it’s her house).  She was very polite and asked, “There was no one to answer the door?” I thought we had rented the entire house.  Who would answer the door?  It was no problem.  She directed me under the porch to a combination locked door where the spare key was hanging.  She said, I could go in through her apartment in the basement and then go upstairs to unlock the main door on our floor.  I didn’t notice at the time, but there were quite a few bedrooms in the basement. Later, I learned that including the 3 of us, she had 3 additional roomers living in the basement along with the one room that she used for herself. 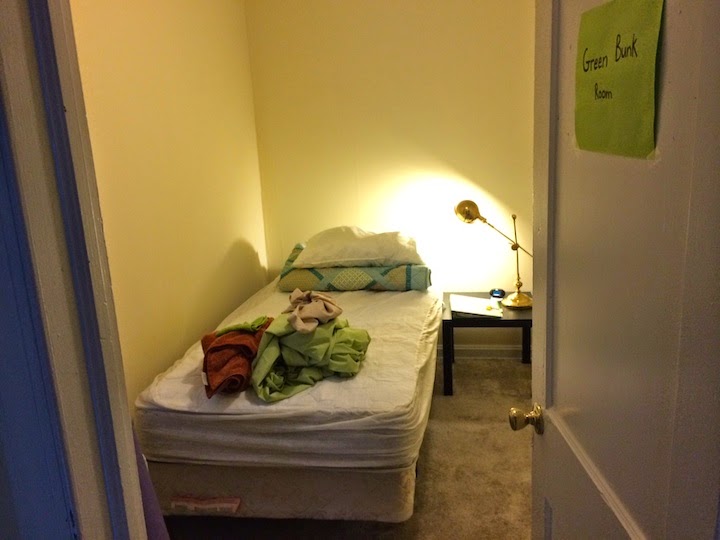 There was a kitchen and a bathroom on each floor.  We had the upper floor and would share that area.  Later I found out that all the guests share all the area.  It was OK, but just took a little “attitude adjustment”.  Sarah had labeled and color coded each of the guest rooms.  Mine was called the “Green Bunk Room”.  There were labels for the “Cheery Front Room”, and the “Blue Couples Room” too.  I saw a theme here.  I found the same labels in the refrigerator shelves, cabinets and bathroom shelves as well.  It seems we all had our little cubbyholes scattered around the upper floor.

When I got to my room, it definitely reminded me of college but without the Kenwood stereo system I left in storage back in 1985.  My room was a bed and a table with a small closet section. It was clean, but minimalist accommodations at best. 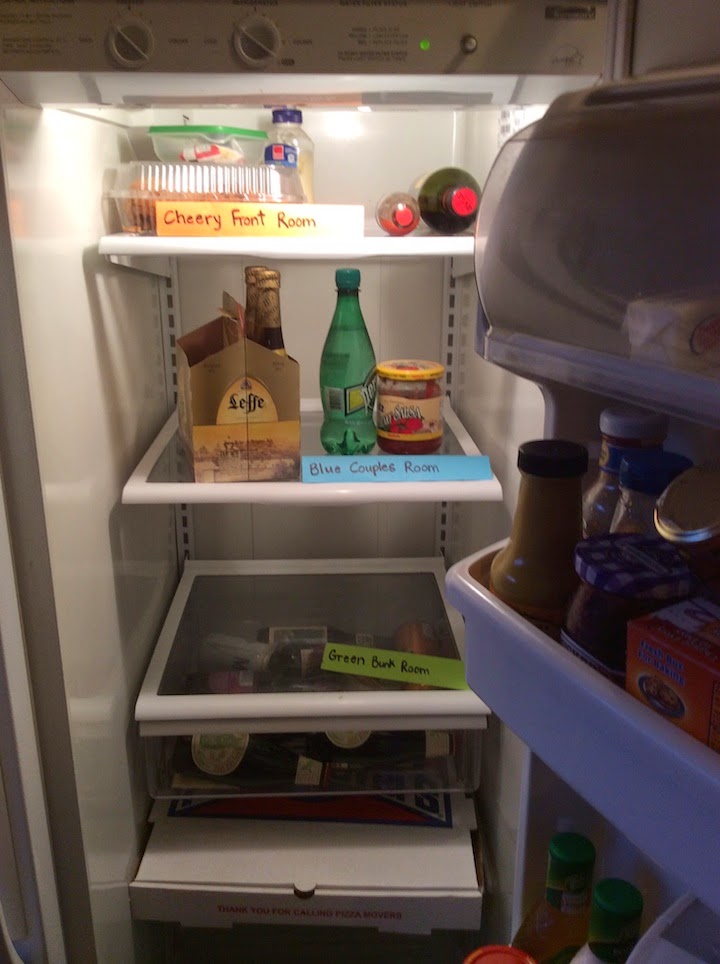 After a little while, Sarah came home and introduced herself.  She welcomed me and asked if I needed anything.  I was polite and said “I’m fine” and went about my business.  She set up her computer on the front porch and quite naturally ignored me and went about her business as well.  Sensing a little awkwardness, I decided to join her on the front porch and make small talk.  Very quickly I learned she was not new to this social economy.  She told me she started with CouchSurfing.org, then moved to Airbnb with one room, and just recently got this house where she could expand and accommodate more guests.  Guessing she was about 28, I was not surprised when she mentioned that her parents were not too comfortable with the idea of their daughter renting out rooms to complete strangers.

But these are not strangers.  She told me, Airbnb will verify the identity of each guest and she has no obligation to accept anyone.  If she has any bad feelings, she can reject the offer.  It turns out she had verified my brother’s identity online through drivers license, valid email address, and just for good measure, he had to take a selfie at booking time to verify he was who he said he was.  It all checked out and she accepted the booking. 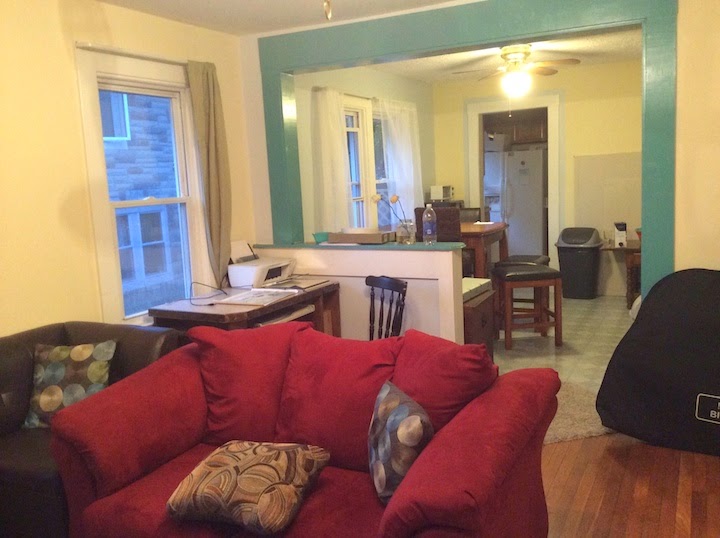 She also told me about couchsurfing, a concept that made me feel like an out-of-touch middle ager.  (I guess I am). CouchSurfing as she described it is like a free airbnb.  You create a profile and a reputation for yourself and then make your “couch” available or request a “couch” when you are traveling the world.  There is no money exchanged and you simply share space with friends you met online.  Now, I’m really beginning to understand the uneasiness of her Dad.

When my brother arrived, we continued the conversation.  It turns out Sarah really enjoys meeting people and loves being a host.  She continued to talk for a little while, but then returned to her lower level apartment and let Tom and me get onto planning the rest of our visit, starting with some time out with the rest of our graduation entourage.

Upon returning a few hours later, we smelled curry in the kitchen.  It seems Dion (a grad student) was fixing dinner.  He introduced himself and said it was hard to find a 4 month lease and this fit the bill just fine.  He was one of the basement tenants.  There was another, I noticed, just briefly, she did not introduce herself.  Later the next day, two more tenants passed through.  One just walked by and went downstairs.  The other, Eric, a former college friend, showed up just for the night laying over from a flight.  It seems Dion was staying elsewhere, so Eric would take his bed that night.  He and Sarah joined the 3 of use for a game of cards.  It seemed like we had all been friends for months. 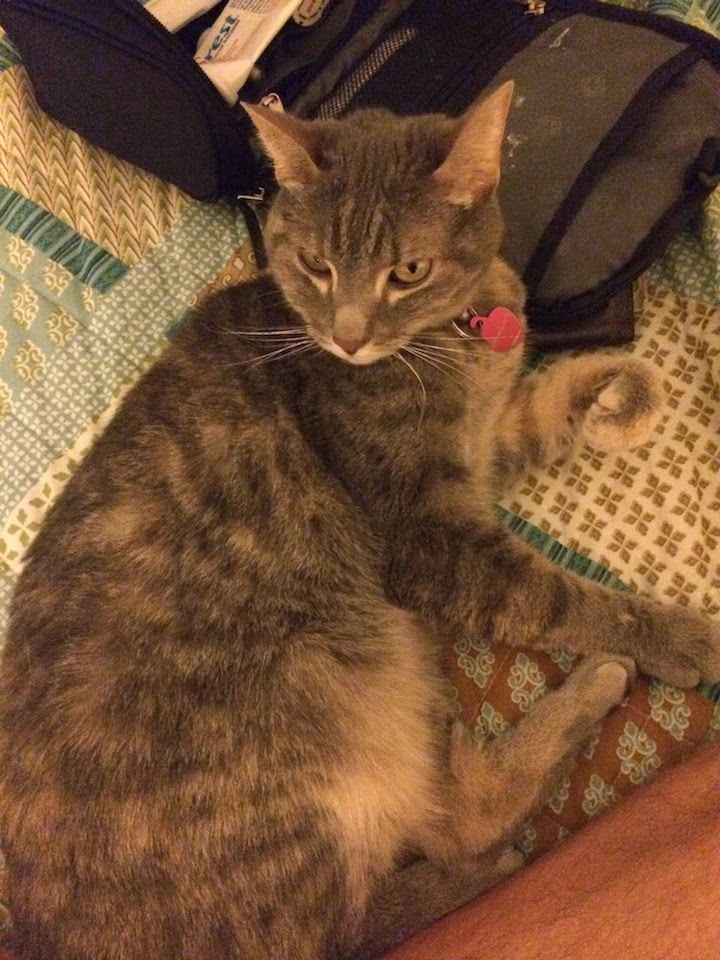 All in all, I get it.  This is the new social economy where everybody is trusted.  If you break the rules and break the trust you are out and will have a very hard time ever re-entering.  I must say this entire experience was very eye opening and telling of the generation coming up behind us.  They are entrepreneurial, trusting, and very social, both on line and in person.

Something we can all consider as we continue to witness the far-reaching impact of the introduction of the World Wide Web when Sarah was just 3 years old.  For her, this is just a natural way to make a living.  For Tom and me, it was an eye-opening education into the next wave of economic evolution.

There will be another University of Maryland graduation in the family next year.  I think I know where we will be staying.

Note: on further research, it appears the terms "Sharing Economy" or "Collaborative Economy" are gaining traction.  I'll keep it Social Economy for now, but acknowledge these terms are evolving and will likely converge in time.

When you get right down to it, each of us is somewhat obsessed with data that is “all about me.”

It started with my Nike+ chip in my shoe about 4 years ago.  I was a runner at the time and had been manually mapping and measuring my runs using the “get directions” function on Google Maps to record my distances.  With the chip on board in my shoe and an iPhone 3G strapped to my arm, I was finally able to get an automatic map drawn of my run along with a record of my total time, I was thrilled.

Next, I migrated to the Nike+ application on the iPhone that produced the same map and timings, but now did it using the new iPhone 4 with it’s built in GPS rather than relying on a separate chip embedded in my shoe.  The app would cheer me on with encouragement as I accomplished my goals.  Later I migrated to RunKeeper in order to better capture my data over time and receive audio cues every 5 or 10 minutes telling me my distance, time, and speed.  The accompanying portal built a day-by-day, month-by-month view of my running trends, showing me progress over time. My run had become quantified.

Fast forward a few years (or digital decades) and today, I wear a Fitbit Force that tracks my every step and activity 24x7.  It monitors and reports steps taken, miles walked, stair flights climbed, calories burned, highly active minutes, and even sleep patterns.  It gives me moving averages of my nightly slumber hours and even how long it takes me to fall asleep.  (btw, I average 5:46 hours a night with a sleep efficiency of 98%.) It encourages me with a small vibration on my wrist and a display celebration when I reach my goal of 10,500 steps in a day (a little over 5 miles), and gives me a chorus of kudos when I check my individual stats on the dashboard portal available on my iPhone, iPad, and web browser.  Now all my waking hours and sleep are quantified.

While I still like to run, my back prefers that I do something less stressful, so I’ve taken up cycling on a road bike.  It really is a pleasure riding through the countryside of beautiful Bucks County in PA.  Now, on the bike, I track and record all my cycling stats using either Runkeeper or Strava.  Using each of these apps, I can measure my heart rate, calories burned, distance climbed, and distance traveled.  With Strava, I get the added benefit of a segment by segment analysis of my ride, compared to other riders who have followed a similar route.  I use a Bluetooth heartstrap that transmits a constant heartbeat stream to my iPhone.  Strava captures it all and posts it to the portal where I can share (and brag) my stats to my cycling friends or curious Facebook onlookers.  Often I receive “kudos” of encouragement from my cycling friends who follow my rides.  One of them regularly keeps up with me from 14 time zones away in Brisbane, Australia, another just 6 time zones away in Madrid.  Now, my ride is quantified.

But wait, it even goes beyond that.  I have even quantified my home.  My Nest thermostat tells me many details about the energy usage in my home, also letting me monitor and set the temperature from anywhere using my iPhone or iPad.  It tracks my energy usage over time and congratulates me with a green leaf when I have an exceptionally energy efficient day.

We all have been hearing about the rapid growth of the Internet of Things, but I think the real excitement comes when we can measure nearly everything about our selves and our lives, and emerge as the Quantified Self. Really when you get right down to it, each of us is somewhat obsessed with data that is “all about me.”