Steve Jobs: Impressions from the Biography 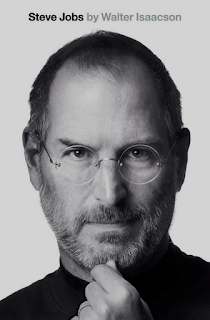 Steve Jobs was quite a remarkable man. I rarely read full books and cannot remember the last time I read a biography. But I just finished a fast 3 week journey through the recently released 650 page biography by Walter Isaacson. (Kindle on iPad edition, by the way)  It was quite a remarkable story and even more remarkable with its openness (as pre-approved by Steve) to be a clear, unbiased account of the author’s impressions after over 40 interviews with Steve and more than a 100 with those that knew him. What results is a enduring picture of a 20th / 21st century technology icon who is as unique as the products he introduced.

I’m not one to do book reviews, but I wanted to share some of my impressions mainly because his work had such an impact on my career and my “early adopter” mentality.

Steve is a several years older than me, but as he and Bill Gates were redefining the computer market from two different angles, I was just entering the workforce, having worked on both IBM and Apple computers, programming my way through the last few years of college. I remember watching the product rollouts and also choosing sides during the 80s when I needed to bet on the technology that would determine my career. I chose Microsoft and continued to keep an eye on Apple through the rollouts of various products through the 80s and 90s. Then when the 21st century Jobs emerged, I left my first choice behind and made the switch to Apple products, first with the iPod, then iPhone, iPad, MacBook Pro and finally even a Mac Mini, just because. The technology released in the last 10 years has been nothing short of revolutionary and we should all be indebted to Jobs for his persistence, his perfectionism and his vision to go with his gut.

As I was reading the book, many asked me what were my impressions. Here they are in no particular order.

In the end, Steve wanted to write the post script. I feel I should give him that same honor here in this post.

“What drove me? I think most creative people want to express appreciation for being able to take advantage of the work that’s been done by others before us. I didn’t invent the language or mathematics I use. I make little of my own food, none of my own clothes. Everything I do depends on other members of our species and the shoulders that we stand on. And a lot of us want to contribute something back to our species and to add something to the flow…We try to use the talents we do have to express our deep feelings, to show our appreciation to all the contributions that came before us, and to add something to that flow. That’s what has driven me” - Steve Jobs

Thank you Steve. You certainly succeeded by adding your “something” to that flow. For that, those of us in technology are truly grateful.